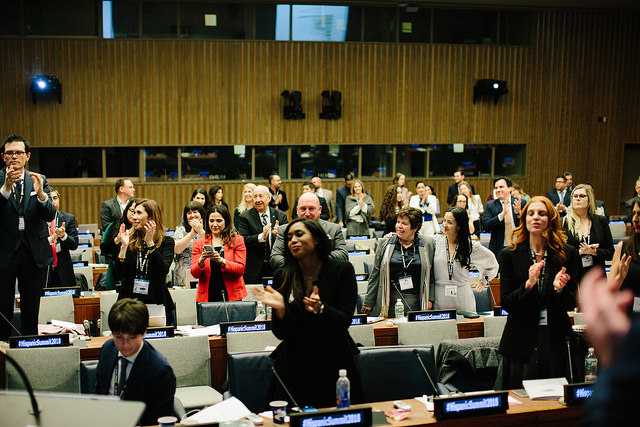 We Are All Human Foundation Brings ‘The Hispanic Promise’ to Davos

JANUARY 21, 2019, DAVOS, Switzerland — Building on the success last month of its first-ever Hispanic Leadership Summit at the United Nations, the We Are All Human Foundation is bringing its advocacy of the U.S. Hispanic community to the World Economic Forum, where it will promote ‘The Hispanic Promise,’ a pledge which calls on companies to support U.S. Hispanics as employees, customers and citizens.

“We are here to enlighten and educate business leaders on the unrealized potential of U.S. Hispanics, the underappreciated heart of the American economy,” said Claudia Romo Edelman, a Swiss-Mexican diplomat and founder of We Are All Human. “At a time when they are often misperceived, U.S. Hispanics cannot afford to be invisible. Their potential must be felt and understood wherever business leaders are, including at influential platforms such as the United Nations and the World Economic Forum.”

‘The Hispanic Promise’ specifically asks signers to “commit to creating inclusive [workplace] environments” and “to take positive actions to hire, promote, retain, and celebrate Hispanics as employees, customers and citizens.” The commitment also calls on businesses to promote “employee engagement, mentorship programs, employee or business resource groups, talent advancement,” and “inclusive” company cultures, “where employees feel they belong, are valued, and have a voice.”

U.S. Hispanics currently account for 18 percent of the U.S. population — more than 55 million people. In addition, they will account for $1.7 trillion of U.S. purchasing power by 2020, and their contribution to annual U.S. GDP has been estimated to be $2.13 trillion, the equivalent of the seventh largest economy in the world, according to a recent report by the Latino Donor-Collaborative.

“As we agreed during our recent summit of more than 300 U.S. Hispanic and Latinx leaders, the U.S. Hispanic community remains underrepresented and under-served despite its significant size and value,” said Romo Edelman. “This is a missed opportunity for brands and companies, because increasingly you cannot grow in the largest economy in the world without succeeding with Hispanics.”

In addition to promoting the promise, on Thursday, January 24, Romo Edelman will help lead a panel discussion at the World Economic Forum about business opportunities in the U.S. Hispanic market. We Are All Human is co-hosting the panel with  Microsoft, and Alan Murray, president and CEO of Fortune magazine, is moderating. Other panelists include Brad Smith, president & chief legal officer of Microsoft, and Cid Wilson, president & CEO, Hispanic Association on Corporate Responsibility (HACR).

During the panel, Romo Edelman will share  insights from We Are All Human’s Hispanic Sentiment Study, which the non-profit conducted last fall with the Zeno Group, a global communications firm. The survey of more than 2,500 U.S. Hispanics offers insights into how companies and brands connect with U.S. Hispanic/Latinx consumers.

We Are All Human’s Hispanic Sentiment Study found:

Also, while at Davos, We Are All Human is releasing a post-event summary of its first Hispanic Leadership Summit, which was held last month at the United Nations. The report summarizes key insights and observations by speakers and attendees, including the three themes they voted on as their top choices for a common Vision 2020 Agenda for the U.S. Hispanic community — access to education, financial empowerment and improving the image of Hispanics and Latinos. The full report can be found here.

About ‘The Hispanic Promise’

We Are All Human is a foundation dedicated to advancing the agenda of equity, diversity, and inclusion.

In October 2018, the Foundation unveiled the results of its Hispanic Sentiment Study, which focused on the outlook of the U.S. Hispanic/Latino community by exploring insights pertaining to politics, business, education, and personal values. Conducted September 15-19, 2018 by the global communications firm Zeno Group, the Hispanic Sentiment Study surveyed more than 2,500 Hispanics/Latinos, aged 14 and older, across the United States.